What Is Geotextile Fabric? – Functions and Uses in Construction

Home / Blog / What Is Geotextile Fabric? – Functions and Uses in Construction
Previous Next

What Is Geotextile Fabric? – Functions and Uses in Construction

What kind of material is “geotextile“, what are its performance indicators, and what is its function? Let’s find out together!

Let’s dive right in now, and you can click on the question that interest you,

1 What is geotextile fabric?

3 The performance characteristics of geotextile

5 The main functions of geotextiles

1 What is geotextile fabric?

Geotextile is permeable material geotextile made of polymer fibers through hot pressing and needling, gluing, and weaving, also known as geotextiles, including several types such as woven geotextile and non-woven geotextile. 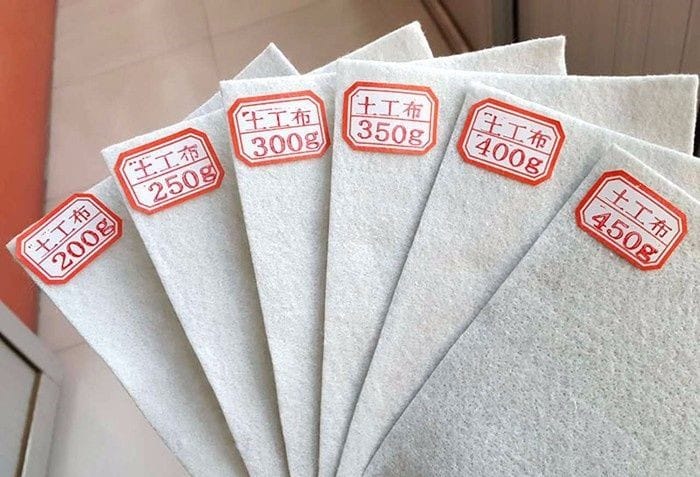 Geotextiles are mainly divided into two types: woven and non-woven.

Geotextiles can be used alone in engineering applications, and can also be used in combination with other geosynthetic materials such as geogrids, geomembranes and geonets.

3 The performance characteristics of geotextile

Woven geotextiles appeared in the 1960s and are characterized by high strength, high cost, poor back filtration and drainage functions, and limitations in engineering applications.

At present, the raw materials of geotextiles are mainly synthetic fibres. The choice of various synthetic fibers needs to be combined with the actual engineering situation, taking into account both the requirements of the field used for its physical and chemical properties and the cost of the product, of which the most common applications are polyester and polypropylene fibers, followed by polyamide fibers and polyvinyl acetyl fibres. Polyester fibres have good physical and mechanical properties, excellent toughness and creep characteristics, high melting point, high-temperature resistance, aging resistance, mature production processes and a high market share. The disadvantages are poor hydrophobicity, easy to accumulate condensation when used for insulation materials, poor performance at low temperatures, ease to glass, reduced strength, poor resistance to acids and alkalis. Polypropylene fiber is good elasticity, instant elastic recovery than polyester fiber; acid and alkali resistance, abrasion resistance, mold resistance, excellent low-temperature resistance; has good hydrophobicity and core absorption performance, can make the moisture along with the fiber axial transfer to the outer surface; small density, only 66% of the polyester fiber, by repeated drafting can get a tight structure, superior performance of fine denier fibers, and then with the reinforcement process can make its strength more superior. The disadvantage is that it is not resistant to high temperatures, with a softening point of 130 to 160 °C. It has poor light resistance and is easy to age and decompose in sunlight, but it can be made UV resistant by adding UV absorbers and other additives.

In addition to the above-mentioned fibres, the raw materials of non-woven geotextiles can also be made from jute fibres, polyethylene fibres, polylactic acid (PLA) fibres and so on. Natural fibres and special fibres have gradually entered the various applications of geotextiles, such as natural fibres (jute, coconut shell fibres, bamboo pulp fibres, etc.) are used in road foundations, drainage, shore protection, soil erosion control and other fields. 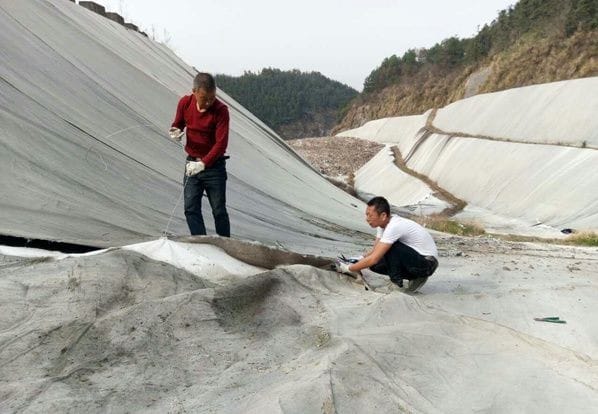 5 The main functions of geotextiles

Geotextiles have a variety of uses, their main functions include filtration, drainage, isolation, reinforcement, protection and impermeability.

As geotextiles have good water permeability and air permeability, placing them in the soil structure allows the liquid inside the soil to pass through and be discharged, and at the same time plays the role of soil retention, effectively preventing the loss of upstream soil particles, fine sand and small stones, preventing the destruction of the soil and keeping the safety and stability of the project.

Geotextile is good water-conducting material, the material itself as a drainage channel can bring together the water inside the soil structure in the geotextile, along with the material slowly discharging the soil.

Geotextile is placed inside the soil as reinforcing material, or geotextile is combined with soil to form a composite body. Compared with unreinforced soil, the strength and deformation properties of reinforced composite soil are significantly improved.

The composite of geotextile and geomembrane etc. has a low water (gas) permeability, which can stop the flow and diffusion of liquid or gas and play the role of impermeability or inclusion.

If geotextiles are laminated with geonets and laid on the surface of exposed soil on slopes, erosion by precipitation and surface runoff can be effectively avoided or mitigated.

Sediment fences made of geotextiles can filter out suspended soil particles in turbid runoff, etc.

In order to block the influence of the expansion and contraction deformation of the bridge due to temperature changes on the longitudinal track structure, to reduce the interaction between the track system and the bridge and to ensure the stability and smoothness of the track structure, China’s passenger rail lines have made a special arrangement for the “two cloths and one membrane” sliding layer, which is an important part of the CRTS II ballastless track system on the bridge. Two cloths and a membrane” sliding layer, i.e. 2 layers of geotextile with 1 layer of geomembrane (400 g cloth + 1.0 HDPE membrane + 200 g cloth) in between, and the geotextile of the isolation layer of the CRTS III ballastless track have strict requirements.

In order to reduce the stability of fly ash, tailing storage, mines, and other dumps and reduce the impact on the surrounding environment, geotextiles are used for reinforcement, isolation, and impermeability.

The ecological bag is made of polypropylene as the raw material of high strength, plane stable needle punching non-woven geotextile fabric processed into a bag. Ecological bags have strong corrosion resistance, UV resistance, non-degradation, can resist the erosion of insect pests, and anti-aging, acid and alkali salt erosion and microbial decomposition. Its water permeable and impermeable function can prevent the loss of filler (soil and nutrient material mixture) inside the bag, but also to achieve the normal exchange of water in the soil, the water required for plant growth can be effectively maintained and timely replenishment, plants can grow freely through the bag, the root system into the engineering foundation soil, the formation of the bag and the soil slope again between the solid role, is the highway and railway slope greening protection, barren mountain It is one of the important construction methods in the road and railway slope protection, barren mountain, mine restoration, riverbank slope protection, and inland river regulation.